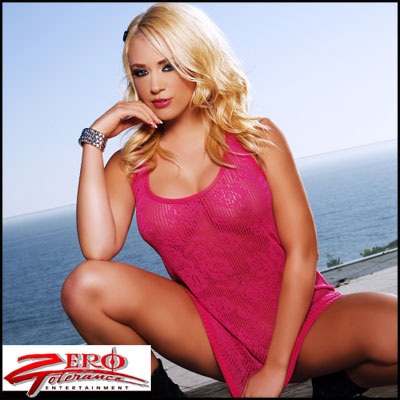 VENICE, CA – It’s the biggest week of the year for the adult industry and Kagney Linn Karter is no exception: Today Zero Tolerance has announced that they have signed the industry’s newest superstar to an exclusive, two-year contract.

“I had a really great first year,” the excited starlet said, “but this gives me the opportunity to really focus with one company that is putting everything they have behind me. I couldn’t be happier!”

Kagney said she is looking forward to performing in the company’s high-end gonzo releases and features.

“We’re going to be working with scripts that are written specifically for me,” she said. “This gives me the chance to have some real input into what movies I appear in, which is something I’m very excited about. It’s exactly the direction I want to go in right now.”

With AEE taking place later this week, Kagney is heading to Vegas with the rest of the industry. She will be signing Thursday through Sunday at the Hustler booth. Saturday night she will be on hand for the AVN Awards, where she is up for several awards.

Completing her show schedule, Kagney will co-host Evan Seinfeld’s party at the Moon nightclub in the Palms Hotel. The event begins at Friday at 10 pm.

With the clock ticking until the big night, AVN Associate Editor Pete Warren interviewed Kagney for AVN Live. In the interview they cover the awards, her first year in the adult business, feature dancing and several other topics.

“I’m really honored and extremely happy and very humble,” she says in the interview. “I’m just happy to be in the same league as those other girls.”

“I’ve never been to the AEE convention or the AVN Awards, so this is going to be a brand new experience for me,” Kagney says. “I know this week is going to be something I will never forget. I’m so excited to meet the fans and to see and meet people in the industry!”

Kagney is also up for New Starlet of the Year at the XBIZ Awards; Best Newbie in RogReviews.com’s Fan Faves competition; and for the Miss FreeOnes 2010 title.

She will be signing in the Hustler booth Thursday through Sunday, from 10-6 each day.