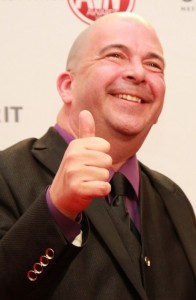 (LOS ANGELES—January 23, 2012)
For the second year in a row, veteran actor and parody mainstay James Bartholet was honored with being one of the most prolific faces in adult films today at the 2012 AVN Awards this weekend at the Hard Rock Hotel & Casino in Las Vegas. He took home the award for “Best Non-Sex Performance” for his role as “The Pornologist” in Wicked Pictures’ lauded “The Rocki Whore Picture Show: A Hardcore Parody.” His award helped tip the scales to a whopping nine wins for the film at the show.

“I’m very proud of the award, and this is the second year in a row! I was very surprised when my name was announced because I was up against several very talented actors. I’d like to thank AVN, Brad Armstrong and Wicked Pictures, Axel Braun and Vivid Entertainment, L.A. Direct Models, and everyone else who helped make this a great year,” said Bartholet.

After seven years in the industry and roles in over 100 films, he has starred in some of the year’s biggest hits.

Bartholet is constantly filming, and can be seen in more parodies and scenes in the next few months,including the “Men In Black” parody for award winning director Brad Armstrong for Wicked Pictures.

Bartholet hosts the weekly “Inside the Industry” radio program with Emy Reyes, heard Wednesday nights from 8:00pm to 9:00pm PST, and rebroadcast daily on LA Talk Radio and iTunes: www.latalkradio.com and www.insidetheindustry.net. The program features interviews with the industry’s top talent, directors, and reviewers, and is a very popular Internet radio show among members of the adult film industry and fans alike.