L.A. Direct Models sits down with the talented and super sexy Helly Hellfire, and discusses her career in both adult and as a mainstream DJ 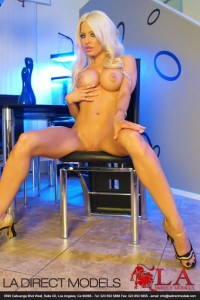 LA Direct Models: When did you start in the industry?
Helly: I started in February 2011 for mofos.com. It was actually a good scene with Jason Brown, and since then I’ve been hooked

LA Direct Models: Who’s your favorite performer to work with?
Helly: I “LOVE” working with Jenna Presley, she’s sexy and a lot of fun. For the guys, I like working with Xander Corvus, hes a very cool guy

LA Direct Models: What’s your favorite kind of scene to do?
Helly: I really love doing g/g now. I always did b/g, but when I started doing g/g, I was like “wow this is cool”. It’s something I don’t get to do often enough “hint hint”

LA Direct Models: What do you do in your time off?
Helly: I run around like a crazy person LOL. I DJ at venues. I go to the gym, I tan, I try to stay in shape. I also love going to rock concerts. I support local musicians, and I do date musicians LOL, but I’m not a rock groupie, I’m a business woman not a groupie

LA Direct Models: How was your experience spinning at the 2012 AVN Awards?
Helly: It was trip! It was the largest room I’ve performed in so far. I wasn’t nervous, I was actually excited. I was performing my own original compilations of tunes and music there, and the response was really good. I’m looking forward to seeing the broadcast on Showtime

LA Direct Models: How do you like working in the industry?
Helly: I really like it. But let’s be real, it’s not a job you can do forever, but if you do it right, it can be profitable. It allows me to have time to also pursue my main interest, which is DJing