It won’t get any bigger than this as adult superstar Tori Black will be the center of attention when an industry-only party is thrown in her honor Wednesday, August 16th at The Federal Bar in North Hollywood.  The private event is free but will be restricted to those in the adult entertainment industry 21 years and older and is being hosted by LesbianX and sponsored by CamSoda and Fleshlight. 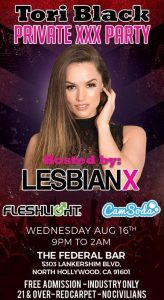 The Penthouse Pet and multiple winner of the coveted AVN, XRCO and XBiz female performer of the year awards is returning to the world of on-camera sex after a six year absence.  Her re-debut is for the fast-rising studio LesbianX and the evening’s DVD release party promises to be the kind of bash the industry was once famous for.

“I’m really looking forward to seeing everybody again and having a fun night at The Federal,” stated Black the Fleshlight and CamSoda model.

Numerous Fleshlight Girls and CamSoda models will also be in attendance.

Kelli Roberts is a webmaster, author and AVN nominated producer who has worked in the adult industry since 1996.