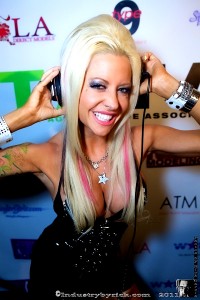 (LOS ANGELES, CA– February 25th, 2012)
Gorgeous and talented DJ turned Adult Film Star; Helly Hellfire, will be burning up the airwaves around the globe this week as she makes guest appearance on a popular radio program.

On Wednesday, February 29th, at 8:00pm PST, Hellfire will be appearing on “Inside The Industry” with hosts James Bartholet and guest co host Trinity St. Clair. “Inside the Industry” is heard on latalkradio.com

“I’m looking forward to being on this cool radio program this week, so listen in and then call in to talk to me live”, said Hellfire.

Hellfire will also be spinning a recurring DJ gig at the world famous “Viper Room”
on the Sunset Strip starting on March 19th from 10pm to 2am in the downstairs lounge area. Hellfire will be spinning the rockin’ new “Metal Step” sound.

For more information on Helly Hellfire, or to arrange an interview, please contact James at the Galaxy Publicity office: 310 652 0770 or james@galaxypublicity.com