No sooner did AVN publish its story of busty Brooklyn Lee fucking up a storm in broad daylight on a small island in the channel between Miami and Miami Beach when we got word of another sighting of the redhead baring all in public. 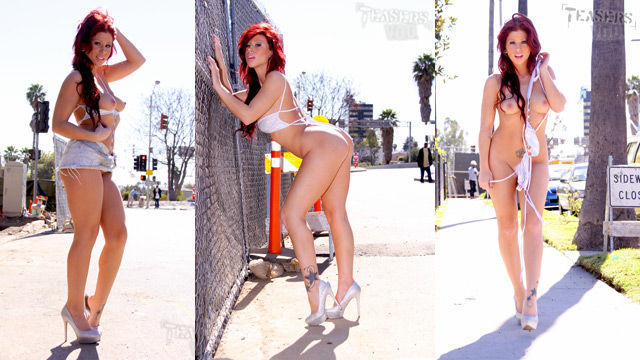 Brooklyn, it appears, can’t get enough of taking it off in public, as shown by this trailer advertising her latest appearance on the TeasersVOD website. It shows Brooklyn “assuming the position” against a chain-link fence at a construction site just off Hollywood Boulevard last Thursday, wearing a skimpy bikini that does nothing to cover the twin mounds of her lovely ass—and later, the equally lovely mounds of her breasts as they “fall out” of the bikini top.

Of course, the construction workers on site were appalled by the display of young flesh, as one can tell by the fact that most of them seemed eager to record the travesty on their cellphone cameras. The trailer then cuts to Brooklyn walking down a tree-lined residential street, also in Hollywood, completely naked.

“As Brooklyn pranced around the streets along a construction site in a slingshot bikini that left nothing to imagination, enthusiastic hard hats were busy documenting the event on their cellphones over the course of what had to be the greatest lunch break in history,” a press release from TeasersVOD states. “In keeping with this sexy starlet’s wild persona, the bikini was soon history and she continued the show in nothing but her heels. The crimson-haired Brooklyn was also attracting a lot of attention from drivers and pedestrians on the highly trafficked street, and when things got too hot, the crew had to make a speedy getaway.”

“I gotta go before I get arrested!” Brooklyn hollered to the cheering construction workers as she waved good-bye and disappeared into a waiting car.

No one knows what the future holds, but if this budding star keeps baring her bum for her appreciative public, her words may just come true.