For the better part of my adult life, I have been dreaming of Keni Styles.

When I was an undergrad, I would drift off in my Phy Sci 27 class and wonder: “Where is Keni Styles?” 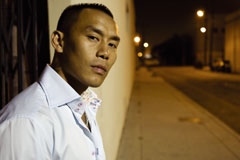 Throughout my mid-20s, I would go out to various Monterrey Park- and Rosemead-area establishments with my two best girlfriends …and while Nanciful ordered and lbq planned some elaborate trick, I would look around and wonder: “Where is Keni Styles?”

In 2007, I sat across a desk from the always bemused SK and told him what adult needed was some hott Asian man meat (that’s right – I told him)… what it needed, though I didn’t know it at the time, was Keni Styles.

And then, one fine day, I found him – I remember it like it was yesterday… a screener of Miss Lucifer’s Malice in Lalaland (2010) came my way, and there was Keni Styles.